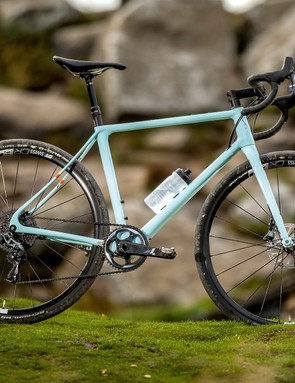 Everything about the V+1 has been an exercise in meticulous planning and execution. Mick Kirkman 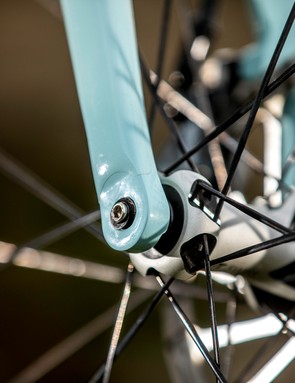 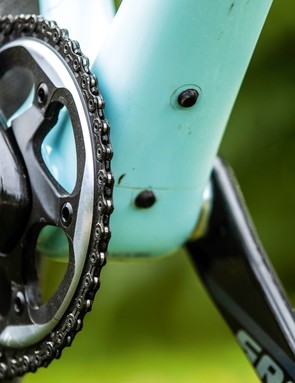 Pressure on the V+1’s pedals is firmly communicated through the 30mm axle Force cranks. Mick Kirkman 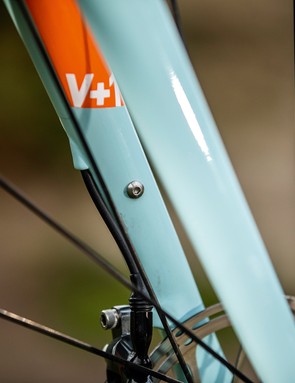 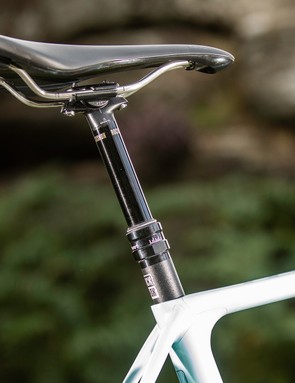 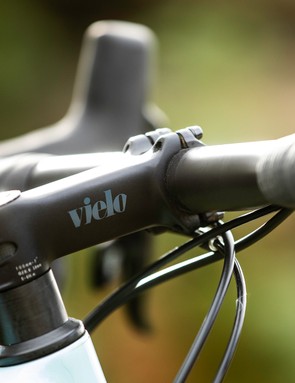 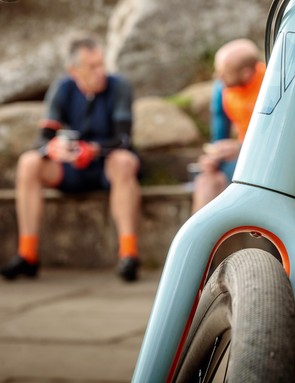 Internal cable routing entry points were designed around a left-hand rear brake swinging round the head tube rather than rubbing against it. Mick Kirkman 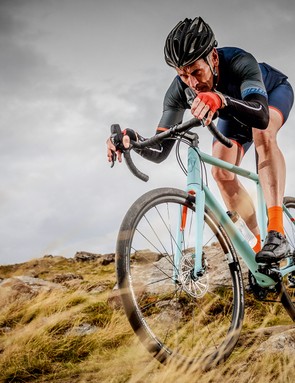 With a bit of hop and pop ‘big stuff’ dodging you can blast the V+1 along rocky moorland singletrack at mountain bike speed. Mick Kirkman 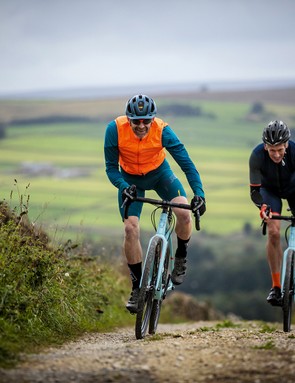 The V+1 happily takes the rough with the smooth. Mick Kirkman 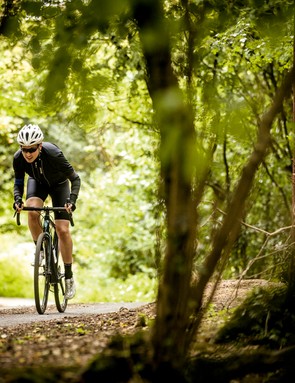 Trevor Hughes and dad Ian knew what they wanted from the V+1. Mick Kirkman 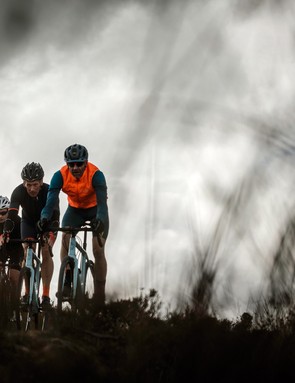 It doesn’t skip, spin or tug at your pedals over patchwork road surfaces, so you can hold your power. Mick Kirkman 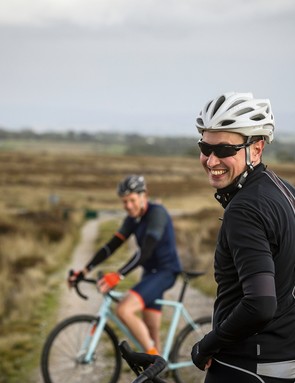 A bike that’ll leave previous favourite pure road or mountain bikes in the shed, and add an extra curl to your grin. Mick Kirkman 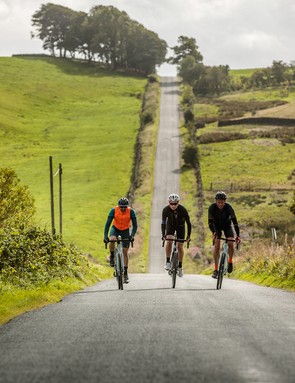 Ian and Trevor seek the best from their builds and think they’ve found it with the V+1. Mick Kirkman

New start-ups are appearing every week, but few are backed with the experience and insight of Vielo, and almost none produce such an outstanding machine as the V+1.

Ian Hughes, founder of Vielo alongside his son Trevor, has been involved in the UK bike industry since the 1980s, and has steered several top-end high-tech brands to major success. While his son Trevor ‘officially’ worked in telecoms he explains he’s “never been far from the industry. From me being in a car seat as he visited dealers as a baby, to working with Dad for shows and events”.

Having established themselves as the distributor for premium German wheel brand Lightweight and a premium German bike brand, the second relationship ended unexpectedly in January 2017.

Rather than jump on another brand’s wagon for their latest challenge, the pair decided to put their money where their mouths were and create exactly the bike that they thought — and hoped a lot of other British riders would think — was perfect for the often-punishing conditions of UK roads and beyond.

Trevor Hughes and dad Ian knew what they wanted from the V+1. Mick Kirkman

While Ian and Trevor had a very clear vision of what their first bike would be, it was a while before they realised a great name was right under their noses.

“We’d been brainstorming for ages trying to think of a name for the company. We came out of the office one day and ‘Vielo’ was staring us in the face. It was the number plate on the company van from when we were looking for something similar to Velo,” laughs Trevor.

While the name might have been a chance win, everything else about the V+1 has been an exercise in meticulous planning and execution.

While the Vielo-branded headset spacers, 130g stem and carefully-flared 200g carbon bar are from different manufacturers, the matte dark grey finish is identical across all three.

The Fabric silicone bar tape has been chosen not just because its grippy-when-wet performance is ideal for the UK’s random weather patterns, you can also tape it from the centre of the bar outwards without a raised edge or the need for finishing tape.

The cable routing under the tape syncs with one of the V+1’s unique frame features. “We wanted the cleanest possible control lines for our builds so we made sure the internal cable routing entry points were designed around a left-hand rear brake swinging round the head tube rather than rubbing against it.”

There’s a second control cable running from the left-hand SRAM Force shifter on my sample bike. It’s not the usual front shifter cable, because the V+1 is a single ring-specific design.

The double-tap shifter action operates a cunning cable to hydraulic actuator within the frame that’s slaved to a RockShox Reverb dropper seatpost. You can lower your seat subtly, or the full 125mm ‘drop’, to suit different road and off-road conditions.

Vielo isn’t the first to offer a dropper seatpost, Bianchi pioneered it on its production bikes a while ago and Whyte has used simple under-saddle lever ‘rodeo’ posts on its Gisburn gravel bikes, but the £200 upgrade option is certainly the neatest and slickest setup I’ve used.

Lightweight Wegweiser wheels, carbon fibre axles and a carbon, rather than titanium, railed Fabric Scoop saddle are all upcharge options.

While frames are available separately for Vielo dealers to create full custom bikes, Ian and Trevor build the ‘standard’ bikes in their Newcastle workshop before sending them to their limited number of handpicked stockists.

“We want to make sure when the customer collects their Vielo V+1 it fits them perfectly and is built to the highest quality standard. No bikes are sent out to customers in boxes.” That also allows them to react to feedback really quickly.

For example, the two original dark and light blue colour options have been joined by a limited edition black/white dazzle camouflage finish after the original ‘disguised’ bike they were showing to shops proved a popular option. Custom colours are also available too, with one owner already matching his frame to his vintage sports car.

While the curves and details of the V+1 put it into the realms of truly beautiful bike sculpting, the mission was always to create a bike tough enough to cope with anything on the worst back roads and a fair amount beyond.

With space for 42mm 700c tyres on wide rims or 2in 650b road-plus tyres, and a frame that’s tested and strength certified to mountain bike standards, the V+1 is well set up for fully exploiting that dropper post option on dirty descents.

Other toughening strategies include very neat sculpted stainless steel heat shields around the disc brake mounts and to protect the chainstay behind the chainrings.

The 12mm A2T fast thread thru-axles get secondary locking bolts to stop them loosening on rough rides. Wet rides are catered for with hidden mudguard mounts for a custom set of SKS mudguards that are in the final prototype stage just ready for winter.

There are two conventional bottle mounts on the seat- and down-tubes as well as an under-down-tube position for a tool keg.

These utility elements aren’t unique in themselves, and I’ve seen other bikes recently that share some of the same frame features. Ian rolls his eyes as he explains: “The designer we work with is one of the best in the business and someone we’ve had a great relationship with at previous brands. The factory we use is a truly premium production facility too. Even though we’re a tiny brand we’ve earned our place there because we’re willing to push for the best possible designs in terms of materials, features and performance, even if that means we’re painfully particular at times.”

And Ian continues: “People work with us to explore what they’re capable of and will often come to us with new techniques or tweaks they want to try, so it’s a really exciting place to be. Inevitably that means you might see some of those ideas on other brands but not with the materials or meticulous quality control that we pay the extra for in our frames.”

The on-paper results are impressive, with sub-900g frame and sub-400g fork weights that most pure road bikes would be proud of, all backed up by that full mountain bike strength certification.

It’s on the road that the work that’s been invested in the V+1’s development really shows, and the rougher that road the better.

I’d been lucky enough to ride that first camo-wrapped prototype bike last winter and spend time on the production bike in spring, including racing it on a notoriously rough and brutal gravel race — the Scotton 100 — where it smoothly flew me to a far better final placing than my legs deserved.

I’ve ridden several really good and significantly cheaper gravel/all-road bikes since then and was concerned that those beautifully seductive seatstay curves had turned my head, or I just got lucky with some great weather on dawn test rides.

Pressure on the V+1’s pedals is firmly communicated through the 30mm axle Force cranks. Mick Kirkman

It didn’t take long for those worries to dissipate. Pressure on the V+1’s pedals is firmly communicated through the 30mm axle Force cranks before the flattened, upcurved chainstays spread that power onto the surface like butter onto toast.

It’s not a rock solid delivery like a race-bred ’cross bike, but the hint of compliance means the stipple-tread Schwalbe tyres hold traction far better than they should.

Crucially, compared to some other high comfort gravel bikes it doesn’t feel dead or morale-sappingly soft, but effervescently sprung and rewarding when you go on the attack. It doesn’t skip, spin or tug at your pedals over roots, dried tractor tread or patchwork road surfaces, so you can hold your rhythm and power uninterrupted.

As one of the lightest big tyre compatible bikes available, every Watt you give it to work with is multiplied to the maximum on climbs or out of corners. It inspires you to hold the throttle open that bit longer and drains the dread out of the last hills of the day.

Even with the dropper post installed, rather than the deliberately-sprung conventional carbon seatpost, the in-saddle experience is similarly limousine-like, to the point where my photographer for the day commented it looked visibly smooth cruising the ancient droveways of the dales.

The V+1 is capable of mountain bike speeds on rocky singletrack. Mick Kirkman

Adding 650b road-plus rubber takes this hovercraft ride to another level, but even on the 700c G-Ones it’s an incredibly smooth ride, even compared to 29in tyre cross-country hardtails.

With a bit of hop and pop ‘big stuff’ dodging you can blast the V+1 along rocky moorland singletrack at mountain bike speed.

The 71-degree head angle gives extra stability and combines with the contact compliance of the low pressure Schwalbe rubber, potential to drop the saddle lower and frame resonance to make descending an absolute knee-down riot.

Any design, however deeply agonised over, steeped in experience and well executed is a compromise. While the KMC Diamond Black chain looks awesome its shifts under power are a little more noisy and ragged than you would get with the carefully sculpted links of SRAM’s own chains.

The tapered fork legs and flattened upper section of the down tube that make the front end so smooth mean the big 170mm front rotor can occasionally provoke judder and stutter when you’re hard on the anchors.

If you prefer a really direct staccato clarity to your ride, then you could justifiably swap out all the eulogies about smoothness and compliance with complaints of isolation and approximation of road feel.


A bike that’s a great all-rounder and will leave a smile on your face. Mick Kirkman

There’s also no avoiding the fact that the V+1 is a very expensive bike – the complete SRAM Force-equipped model is £5,499, while the frame and fork kit is £2,999 — and there are more affordable options that are almost as good.

However, if you can afford to enjoy the very best and want the service and support to match, a long day through the varied landscape of Nidderdale has proved that the V+1 is up among the very top options for the rapidly accelerating world of all-round riding.

A bike that’ll leave previous favourite pure road or mountain bikes in the shed, and add an extra curl to your grin that perfectly matches the slight curve and flare of those carefully wrapped composite bars.

Read The Rest at
bikeradar.com

Final Offers The B3 From Its Latest Range Of...

They're see-through and zap germs: Unusual face masks that don’t just cover up
5