SEM and TEM images of MCM samples before and after modification were depicted in Figs. 1 and 2. The regular hexagonal pore structure and the structure integrity from MCM24 was well-maintained25 after modification and the orderings of the (100) and (110) was not affected by Schiff base co-condensation. The particle size of the four samples were 833 nm, 789 nm, 701 nm and 763 nm respectively for MCM, Sal-MCM, Fur-MCM and Ben-MCM measured from the SEM images. And the surface of MCM become rough with small particles formed on the surface as the SEM images shown in Fig. 1 after modification. Also a layered of shell structure appeared on the surface as the TEM images from Fig. 2 showed due to the precipitation of silane coupling agent26. 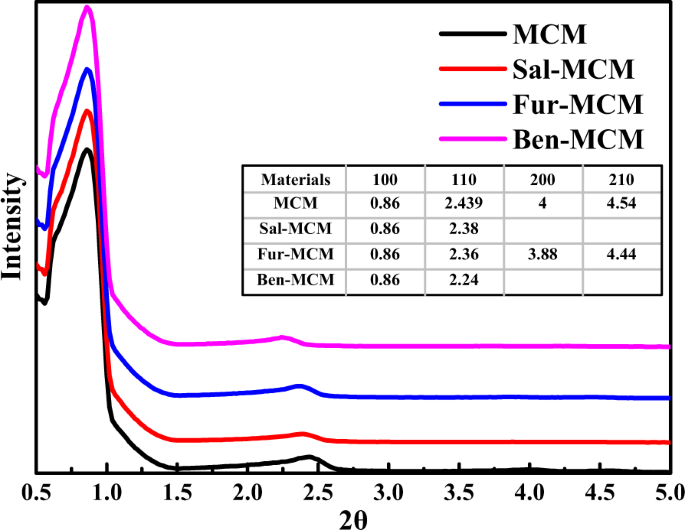 As shown in Fig. 4a, the N2 adsorption/desorption isotherms of MCM, Sal-MCM, Fur-MCM and Ben-MCM belong to Langmuir IV (the slope of it was decreasing) which indicated that their pore size was relatively small and also confirmed by the pore size distribution results calculated by DFT method28 as shown in Fig. 4b. The N2 adsorption/desorption isotherms in Fig. 4 do not overlap at relative pressures <0.2 were due to N2 chemisorbed by silanol on the surface of the pores which confirmed by our previous researches18,26. The rapid shift of N2 adsorption isotherms caused by capillary condensation inside the pore for MCM disappeared after modification. And the BET surface, pore size and pore volume decreased after modification due to the pore block by Schiff base. And the BET surface of Sal-MCM, Fur-MCM and Ben-MCM after modification were 225.5 m2/g, 413.4 m2/g and 274.8 m2/g respectively which illustrated the difference in the degree of pore block by three different Schiff base as shown in Table 1 which was much higher than our previous researches (<200 m2/g) due to the templates removed from the samples. Fur-MCM had the highest BET surface among and largest pore size and pore volume among the Schiff base modified MCM indicating that the surface of the pores from MCM were homogeneously grafted by furalimine probably due to its strongest interaction towards to the substrate.

N2 adsorption/ desorption isotherms (a) and pore size distribution (b) of MCM, Sal-MCM, Fur-MCM and Ben-MCM.

The FTIR spectra of MCM, Sal-MCM, Fur-MCM and Ben-MCM before and after loading Me were depicted in Fig. 5. Two bands appeared in 3447 cm−1 and 968 cm−1 for MCM ascribed to stretching and bending vibration of Si-OH respectively. 1080 cm−1 and 810 cm−1 were attributed to the characteristic peaks of Si-O-Si on the SiO2 framework30. Comparing to MCM, two new bands appeared at 2927 cm−1 and 2851 cm−1 belonging to the symmetric and nonsymmetrical C-H stretching vibration bands from amino group for Schiff base which indicated the Schiff base was successfully grafted to MCM. After loading Me, the characteristic peaks of Me located at 3060, 2990, 2930, 1635, 1590 and 1510 cm−1 which proved that the Me was successfully adsorbed by mesoporous silica31. The IR spectra of Me showed a peak at 1724 cm−1 for carbonyl group which was gradually disappearing after loaded on mesoporous silica due to the interaction with MCM substrate. Intensity of peaks between 2800 and 3100 cm−1 ascribed to the C–H stretching band was increased significantly showing that Me was successfully impregnated with mesoporous silica. 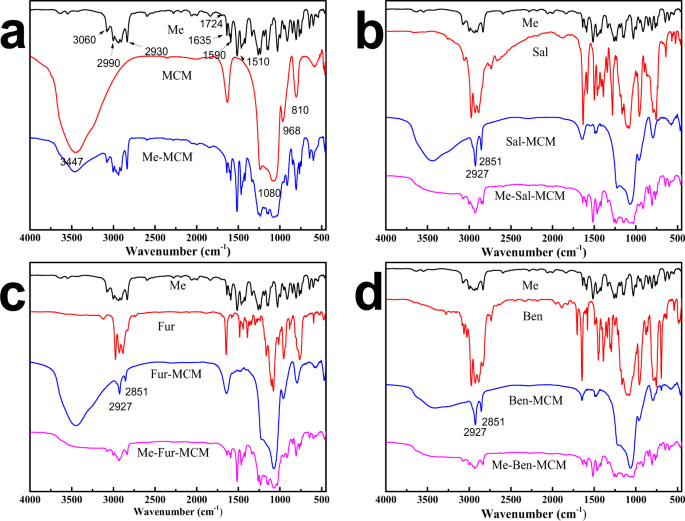 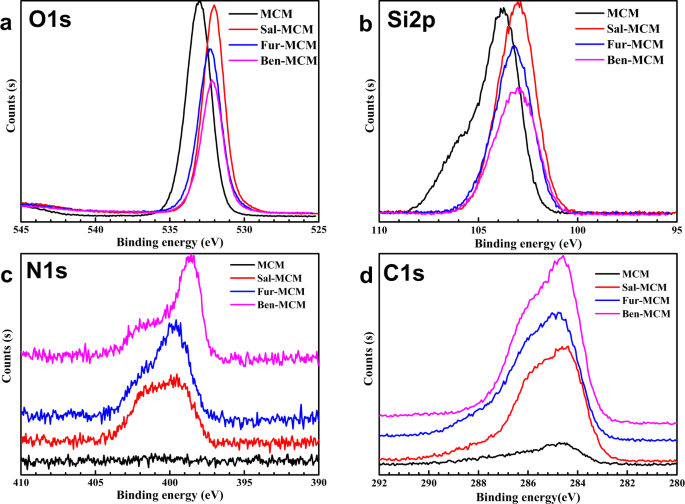 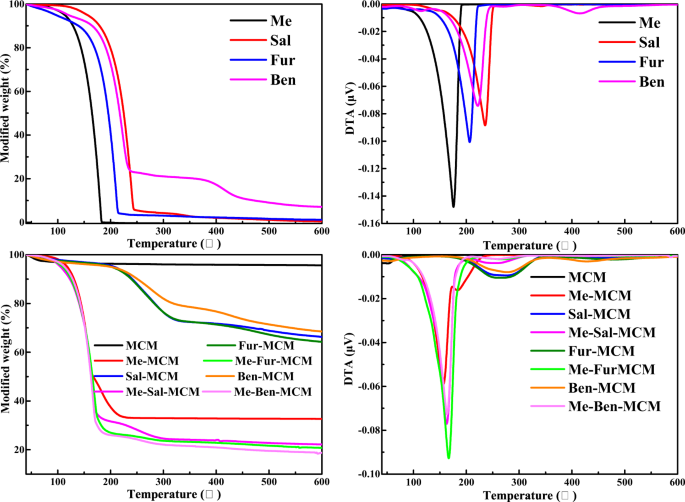 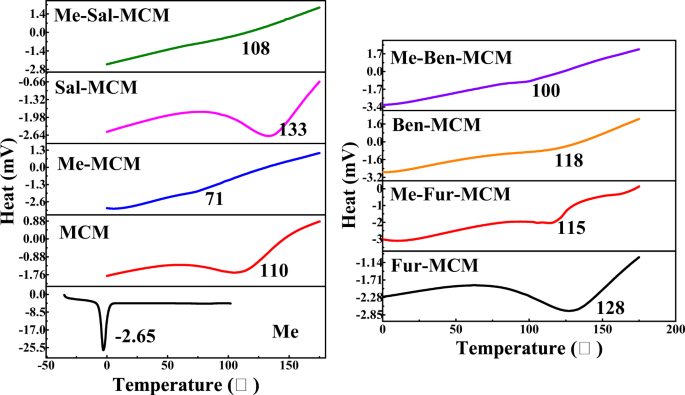 And the DSC thermograms of MCM, Me-MCM, Sal-MCM, Me-Sal-MCM, Fur-MCM, Me-Fur-MCM, Ben-MCM and Me-Ben-MCM were shown in Fig. 8. The fusion peaks of Schiff base modified mesoporous silica had a significant shift from 110 °C to 133 °C, 128 °C and 118 °C for Sal-MCM Fur-MCM and Ben-MCM comparing with MCM without modification which convinced the interaction between Schiff base and mesoporous silica in accordance with the XPS results. Another shift of the fusion peak happened after loading Me from 110 °C, 133 °C, 128 °C and 118 °C to 71 °C, 108 °C, 115 °C and 100 °C for Me-MCM, Me-Sal-MCM, Me-Fur-MCM and Me-Ben-MCM respectively due to the induction effect from Me. However, the disappearance of Me fusion peak proved that the Me is distributed homogeneously in amorphous state in the pores of the mesoporous silica. 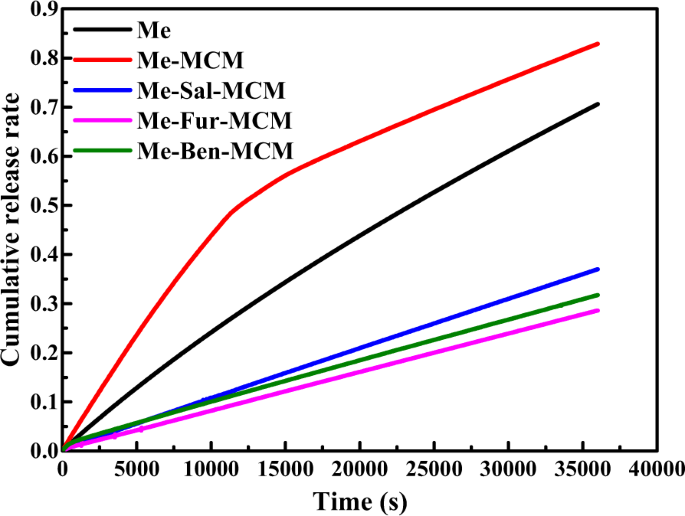 To further understand the sustained release mechanism, the data of sustained release of Me and Me loaded in various mesoporous silica were fitted to different kinetic models (Table 4). The sustained release curves of Me and Me-MCM were in accordance with first-order kinetic equation proving the barrier-free diffusion of the drug. While Me-Sal-MCM, Me-Fur-MCM and Me-Ben-MCM were in consistent with Korsmeryer-Pappas kinetic equation. The diffusion coefficients K1 of the fitting equations were between 0.45~1 controlled by a non-Fickian diffusion mechanism33,34. The sustained release behavior of MCM changed after modification because the difference of the concentration was no longer the main factor on controlling the release performance due to the strengthened interaction between Me and the substrate. Therefore, the service life of Me was prolonged.

The practical performance of the samples was evaluated by attraction of Bactrocera Dorsalis test. The lure percentages of Me-MCM, Me-Sal-MCM, Me-Fur-MCM and Me-Ben-MCM for Bactrocera Dorsalis were 40.00%, 46.67%, 53.33% and 46.67% after 72 h as depicted in Fig. 10. However, pure Me has highest lure percentage (86.67%) due to the decrease in drugs amount actually used in the experiment. While calculated from the TG results for the lure efficiency in one unit drug from Me, Me-MCM, Me-Sal-MCM, Me-Fur-MCM and Me-Ben-MCM have the equivalent of 59%, 69%, 73% and 63% pure Me lure efficiency respectively. In other words, the highest lure rate of the modified MCM (Me-Fur-MCM) equals to the 73% of the pure Me. In summary, the sustained release system get rid of the organic solution and increases the Me service life without affecting its performance significantly. 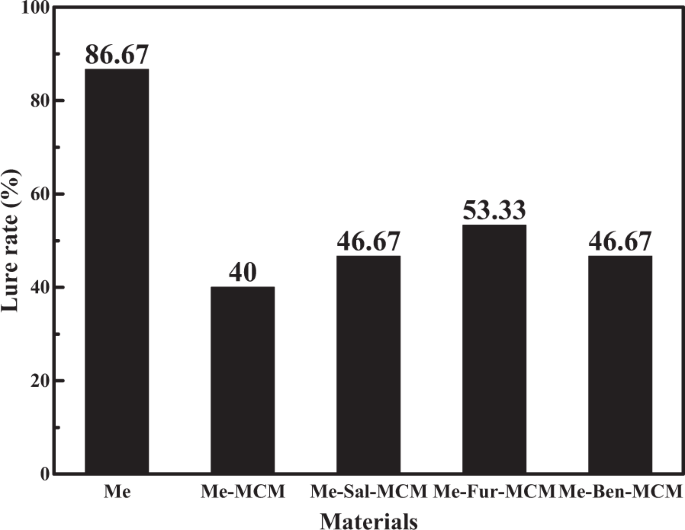 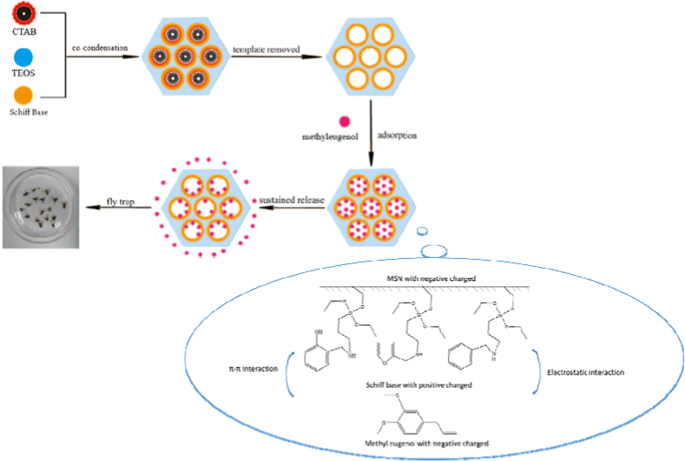 The schematic diagram of drug release of Schiff base modified MCM.

Read The Rest at
nature.com

One dead after Saturday stabbing in Marion
7

A generation gap in car wax
8

A generation gap in car wax
9