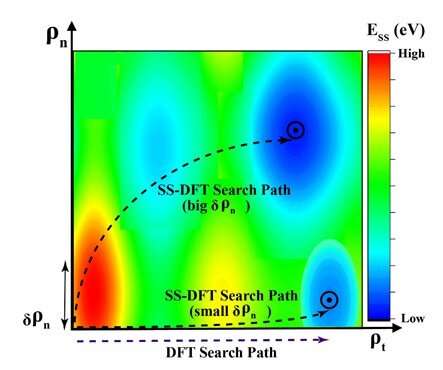 NUS scientists have predicted a new type of nonequilibrium effects that could generally exist in nanoscale electronic devices, and successfully explained a recent puzzling experiment using the effects.

Understanding bias-induced nonequilibrium effects on electron transport properties of nanoscale junctions is the central issue in computational nanoscience. The standard density functional theory (DFT)-based first-principles method that combines DFT and nonequilibrium Green's functions' techniques has been widely used in modeling nonequilibrium nanoscale devices. This provides qualitative understanding of experiments by relating the measured conductance to tunneling of electrons through "molecular" orbitals of the devices.

A recent experiment, however, reported surprising transport phenomena through silane junctions that cannot be understood by the standard DFT method. The conductance for various silane molecules connected with two different linker groups (amine or thiol) to either gold (Au) or silver (Ag) metal electrodes were measured. It was found that, when using the amine linker, the Au electrode generates a much higher conductance when compared to an Ag electrode. With the thiol linker, this trend reverses and the Ag electrode is significantly more conducting than the Au electrode. In contrast, DFT-based calculations predict that the Au electrode is always more conducting than the Ag electrode regardless of the type of linkers. This contradiction between theoretical and experimental results presents the community of computational nanoscience with an exciting challenge.

To address this challenge, the research group led by Prof Zhang Chun from the Department of Physics and the Department of Chemistry, National University of Singapore, studied the theoretical transport properties of silane junctions building on the steady-state DFT technique that was proposed by Prof Zhang himself back in 2015. The steady-state DFT considers nonequilibrium effects in full by employing nonequilibrium quantum statistics. They found that underlying the puzzling experimental observations is a novel type of nonequilibrium effects (named "nonequilibrium pulling" in their work) that exist in silane junctions having thiol linkers. Their theoretical calculations show that, when the junction is near equilibrium, the standard DFT method is an excellent approximation of steady state conditions. However, at low biases around the region of 0.2 volts, the "nonequilibrium pulling" effect drives the thiol-terminated silanes far away from equilibrium, thus resulting in the reversal of conductance values observed in experiments.

Prof Zhang says that "further analysis suggests that these nonequilibrium effects could generally exist in nanoscale devices in which there are conducting channels mainly residing at the source contact and located close to the bias window. These findings significantly broaden our fundamental understanding of electron transport at the nanoscale."

This document is subject to copyright. Apart from any fair dealing for the purpose of private study or research, no part may be reproduced without the written permission. The content is provided for information purposes only.

Read The Rest at
phys.org

The Best iPad Cases For Protecting And Carrying Your iPad