Oct 08, 2019 (Nanowerk Spotlight) Hydrogels are water-rich and biocompatible soft polymeric materials. These materials have existed for more than half a century and today they have many applications in various fields and industries. More recently, environment-sensitive ('smart') hydrogels have become the subject of considerable scientific research in various fields including biomedical, biotechnology, pharmaceutical, and separation science.
As a coating, hydrogels bring many advantages to regular solid surfaces: A hydrogel-coated substrate unites the superior properties of the substrate (e.g., strength, stiffness, and toughness) and the superior properties of the hydrogel (e.g., hydrophilicity, lubricity, biocompatibility, and drug-release).
In principle, any hydrogel can coat any substrate to achieve some functions by their union. This enormous diversity has enabled numerous existing and emerging applications in engineering and medicine. Examples include soft robotic components, drug delivery (for instance with nanocomposite hydrogels), implants, artificial skin, plasmonic nanosensors and actuators.
However, making hydrogel coatings outside a laboratory environment can be difficult. In existing methods for stable hydrogel coating, three processes need to take place: covalent bonds polymerize monomer units into polymer chains, crosslink the polymer chains into a polymer network, and interlink the polymer network to the substrate.
"The concurrence of these three processes – polymerization, crosslinking, and interlinking – is unnecessary and hinders the widespread application of hydrogel coatings," Zhigang Suo, Allen E. and Marilyn M. Puckett Professor of Mechanics and Materials at Harvard University, tells Nanowerk. "Inspired by the economics of paint manufacturing, we have developed a technique for hydrogel coating preparation that breaks the process up into several steps. This step-wise synthetic pattern, decoupling polymerization from crosslinking and interlinking, divides the labor between the hydrogel coating maker and its user."
Suo and his team of researchers from the Kavli Institute for Bionano Science and Technology have detailed their findings in Advanced Materials ("Hydrogel Paint") . 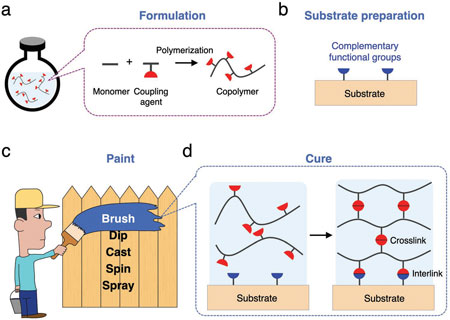 Principle of hydrogel paint. a) Formulation: monomer units and coupling agents copolymerize into polymer chains, but do not crosslink into a network, resulting in an aqueous solution. The solution may also contain other compounds for various functions but are not drawn here. b) Substrate preparation: functional groups complementary to the coupling agents are imparted onto the surface of a substrate. c) Paint: The aqueous solution is painted on the substrate by various operations. d) Cure: The coupling agents react with each other to crosslink. (Reprinted with permission by Wiley-VCH Verlag)
The scientists realized the decoupling of polymerization, crosslink and interlink processes by introducing silane chemistry. Silanes are a broad category of chemical compounds of silicon and other atoms such as carbon, nitrogen and hydrogen. They are commonly used as coupling agents in copolymerization processes during hydrogel synthesis.
Producing hydrogel coatings in separate steps for different applications is a new concept in the field, yet very basic and common in the paint industry: The paint is manufactured in factories with whatever sophisticated chemical processing and treatments and then the product becomes user-friendly and can be stocked at the retailers’ end.
The team's hydrogel paint is an aqueous solution of silane modified polymer chains, which will crosslink and interlink with a target substrate.
"Our hydrogel paint can be dried, ground into powders, and stored for a long shelf life," says Dr. Xi Yao, who together with Junjie Liu and Dr. Canhui Yang first-authored the paper. "After redissolving in water, the dry powder becomes hydrogel paint again and can form crosslinks and interlinks."
"The result is that we now are able to restrain polymerization – a toxic and lab demanding chemical process – in safe production facilities and make hydrogel coatings out of the as-prepared product much like using regular paints," the researchers points out. " Hydrogel paint may one day even become a specialty paint with high-end functions and particular application aspects."
After synthesis of the hydrogel paint, its rheology must be tuned to suit each operation of paint. "For example, a thick hydrogel paint works for brush and a dilute hydrogel paint works for spray," explains Yao. "The rheology of the hydrogel paint can be readily tuned through chain transfer agent (CTA), silane content, water content as well as rheological modifier."
Compared to the traditional method, where only a single reaction governs all the synthetic processes, the decoupling devised by the team allows for a more customizable preparation. For instance, it now has become possible to tune chain length and crosslinking rate.
"The principle established in our work can be adapted to guide the development of hydrogel paints of other chemistries and characteristics," Suo concludes. "For instance, we may further decouple crosslinking and interlinking to enable detachable hydrogel coatings, on-demand, in response to a cue, such as a change in pH or an exposure to a UV light. The crosslinks can still be covalent bonds to maintain the integrity of the hydrogel, but the interlinks can be various noncovalent bonds or dynamic covalent bonds to respond to various cues."
By Michael Berger – Michael is author of three books by the Royal Society of Chemistry:
Nano-Society: Pushing the Boundaries of Technology,
Nanotechnology: The Future is Tiny, and
Nanoengineering: The Skills and Tools Making Technology Invisible
Copyright © Nanowerk
hydrogel paint hydrogel coatings shelf

Read The Rest at
nanowerk.com

A generation gap in car wax
2