Don’t Bet On Aliens: Phosphine Is Amazing, But Doesn’t Mean ‘Life On Venus’ 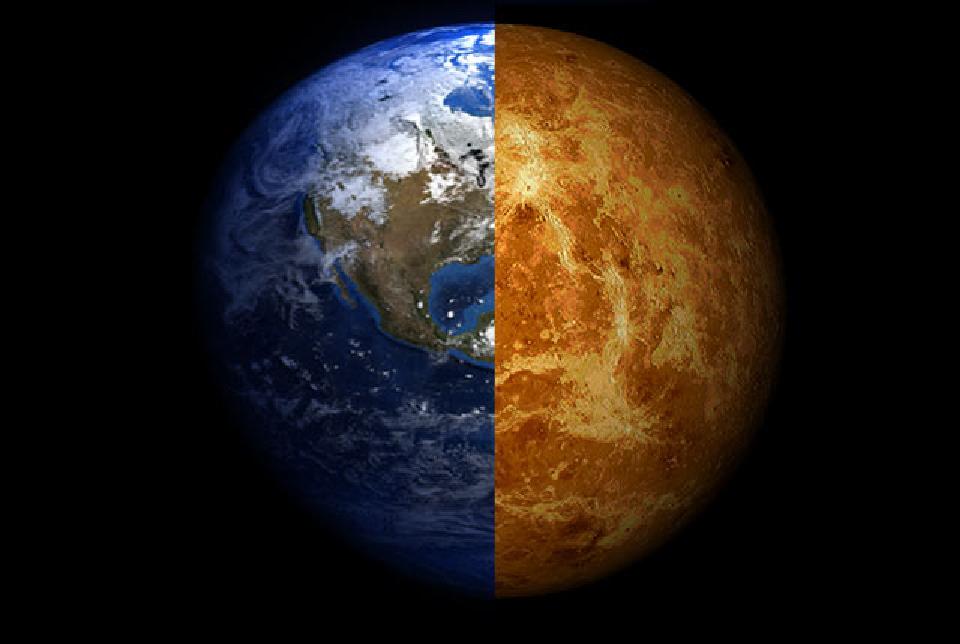 Venus, in many ways, is the planet most similar to Earth in the Solar System. With a comparable mass ... [+] and radius, it may have been watery, wet, and as similarly life-friendly as Earth is for hundreds of millions or even billions of years. Today, its thick atmosphere rich in sulfuric acid makes its surface inhospitable, but offers a wide potential for chemical reactions.

When it comes to life in the Universe, we still have no definitive answer to the biggest question of all, “are we alone?” Despite the facts that the raw ingredients for life are everywhere, that planets are everywhere, and that there are billions upon billions of chances for planets with life in the Milky Way alone, we don’t know of even a single instance of a world beyond Earth that is definitively home to live. That quest — for the first sign of life of extraterrestrial origin — is one that we hope to scientifically resolve in the very near future.

There could be intelligent civilizations out there, and efforts such as SETI and Breakthrough Listen are aimed at searching for them. There could be life on exoplanets orbiting distant stars, and measuring the spectral signatures of their atmospheres, from transit spectroscopy or (in the near future) direct imaging could reveal the existence of life. Or, perhaps, there’s even life right here in our own Solar System: Mars, Titan, Europa, Triton, Enceladus, Pluto, and even Venus are candidate worlds for it.

In a fascinating new discovery, phosphine has just been identified on Venus. Here’s what it means: for science, for chemistry, and for the biggest question of all: life in the Universe. 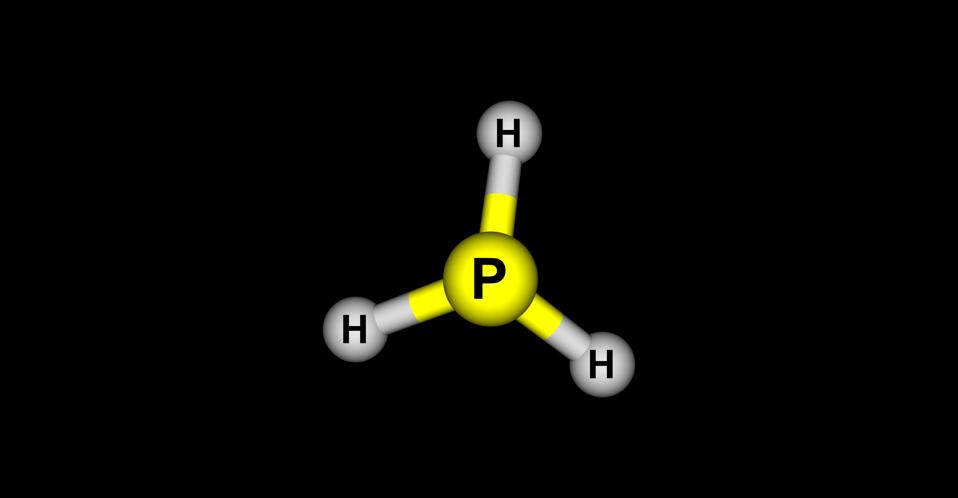 Phosphine (or phosphane) is the compound with the chemical formula PH3. It is a colorless, ... [+] flammable, toxic gas here on Earth, but is also produced by anaerobic bacteria naturally in oxygen-deprived environments.

Phosphine, at first glance, is a rather unremarkable molecule to find. The most common elements in the Universe are hydrogen and helium: produced overwhelmingly in the Big Bang. The next most common include oxygen, carbon, and nitrogen, which are formed in prior generations of stars. The early atmospheres of our Solar System’s rocky planets — including Venus, Earth, and Mars — were dominated by these elements, likely containing large quantities of water (H2O), methane (CH4), and ammonia (NH3).

But elements in the same families as oxygen, carbon, and nitrogen form similar molecules. Silane (SiH4) is analogous to methane; hydrogen sulfide (H2S) has many properties in common with water; and phosphine (PH3) shares many traits with ammonia. In a remarkable new set of studies, a team of scientists from multiple disparate fields came together to write a series of 3 papers, announcing a spectacular discovery: near the top haze-layers of Venus’s atmosphere, peaking at mid-latitudes, phosphine has been detected in its atmosphere, at about the 20 parts-per-billion level.

And that just maybe, with this detection, we’ve discovered a “hint” of extraterrestrial life.

In the mid-altitudes of Venus's hazy atmosphere, phosphine molecules have been found to exist at ... [+] about the 20 parts-per-billion level. This has led to some fascinating speculations as to its cause, with chemical, geological, and biological reactions all under consideration.

The first part of this study is the most robust part: we really can claim, with a great deal of certainty, that we have detected this molecule — phosphine — on Venus. The technique we used is straightforward:

Two different observatories have now seen this telltale radio signal: the JCMT and ALMA. Independently, they both see the same absorption feature of the same strength at the same wavelength. Venus is a known natural radio emitter, and phosphine creates a characteristic “dip” in that emission due to its presence. Although there’s always the possibility that we’ve done something incorrectly, this appears to be a strong detection: phosphine is likely present on Venus. 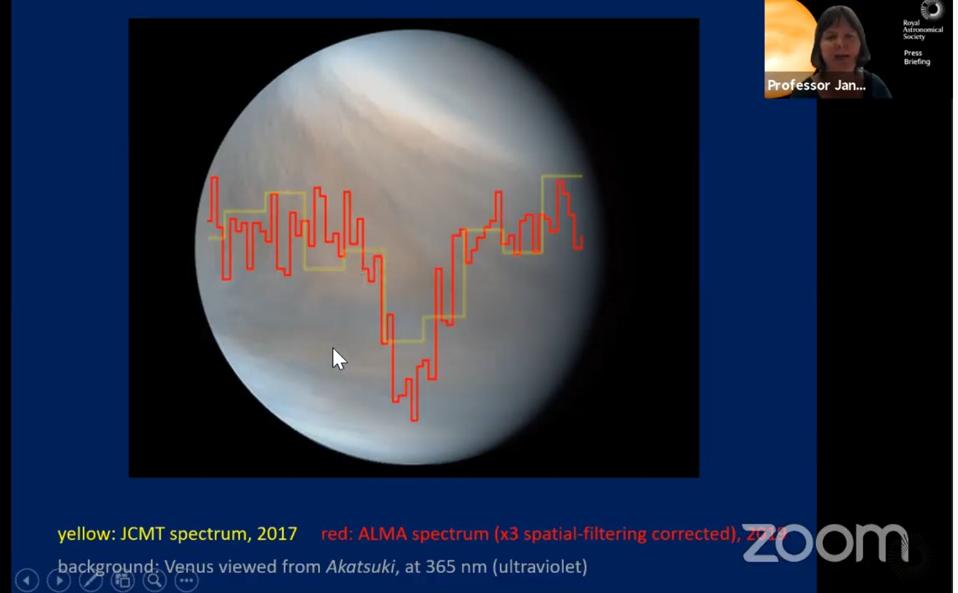 In a press conference on Monday, September 14, 2020, scientists released a series of discovery ... [+] papers confirming the detection of phosphine in the atmospheric hazes of Venus. Data from two independent telescopes, JCMT and ALMA, both show the signature of phosphine at radio wavelengths.

This, in and of itself, is a major scientific discovery, and yet it tells us extraordinarily little. The team of scientists found that phosphine exists in or near the “temperate zone” on Venus, which has comparable temperatures and atmospheric pressures to what we find on Earth’s surface. Despite the hazy, dense atmosphere rich in sulfuric acid, the phosphine signal found is strongest at Venus’s mid-latitudes: reaching abundances of 20 parts-per-billion (about 0.000002% of Venus’s atmosphere).

Molecules have many different wavelengths they can absorb light at, which means there are many different signatures we can observe if we want to quantify the presence and properties of this molecule in Venus’s atmosphere. So far, we only have the detection at one particular wavelength, but multiple others would tell us much more.

Once we’ve established the presence of phosphine, the next step is understanding where it comes from. 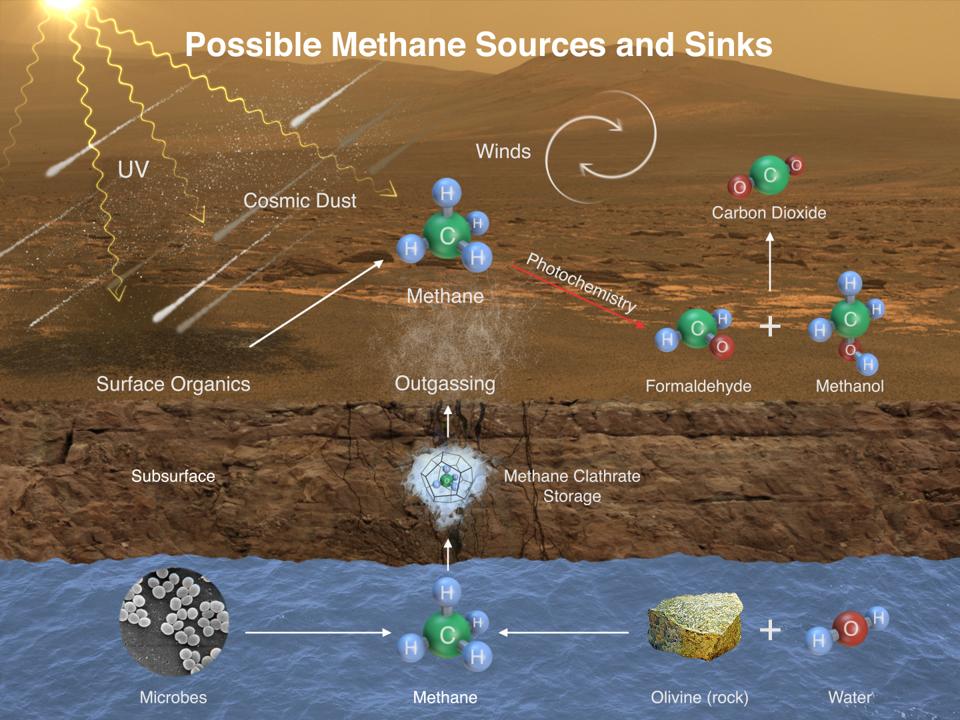 Just over the past few years, the Mars Curiosity rover detected Methane vents on Mars, which could ... [+] have been produced either organically or inorganically. Although microbes are a fascinating possibility, the smart betting money is on geochemical production instead.

This is an extremely tricky game. We have a long, long history of finding an unexpected signature, noting that our current understanding is insufficient to explain what we see, and leaping to the wildest conclusion of all: alien life.

Even Carl Sagan told a now-famous story about how scientists misled themselves to consider the presence of dinosaurs on Venus as an explanation for an extraordinarily mundane set of observations.

Of course, finding phosphine on Venus is anything but mundane. While the surface of Venus, like many of the rocky bodies in our Solar System, contains copious amounts of phosphorous (in the form of various phosphates), converting those phosphates into phosphine is a difficult proposition. One of the scientists who worked on this discovery, Dr. William Bains, detailed three conceivable ways that this conversion could occur:

Using the most sophisticated chemical modeling available — and considering a number of exotic scenarios as well — he found that none of them fit. All of them yield far too little phosphine to explain the observed signal.

The modeled pathway for the maximum natural (chemical) production of phosphine from phosphates. This ... [+] mechanism for production fails to reproduce the necessary, observed levels by many orders of magnitude. That does not mean there's life on Venus; it means that we have a mystery to solve.

So, does that mean that this phosphine could have been biologically produced?

Sure. Of course. In fact, if you look at how phosphine is created on Earth, it’s exclusively produced biologically. The only ways that phosphine comes into existence on Earth are naturally, produced by bacteria in anaerobic environments, or artificially, produced by humans via controlled chemical reactions. There’s an awful lot we don’t know about the natural production, though, including which organism actually produces it (speculated to be a form of E. coli), what the biochemical pathway that produces it is, and whether that pathway can be reproduced inorganically.

Meanwhile, phosphine has been interestingly found elsewhere in abundance throughout the Universe. It exists in large quantities in the atmospheres of the gas giants Jupiter and Saturn. We find it both on its own and bound to other molecules around carbon-rich stars and in the interstellar medium. It’s found in trace amounts on Earth (due to these phosphine-producing bacteria), and now in the cloud-decks of Venus as well. 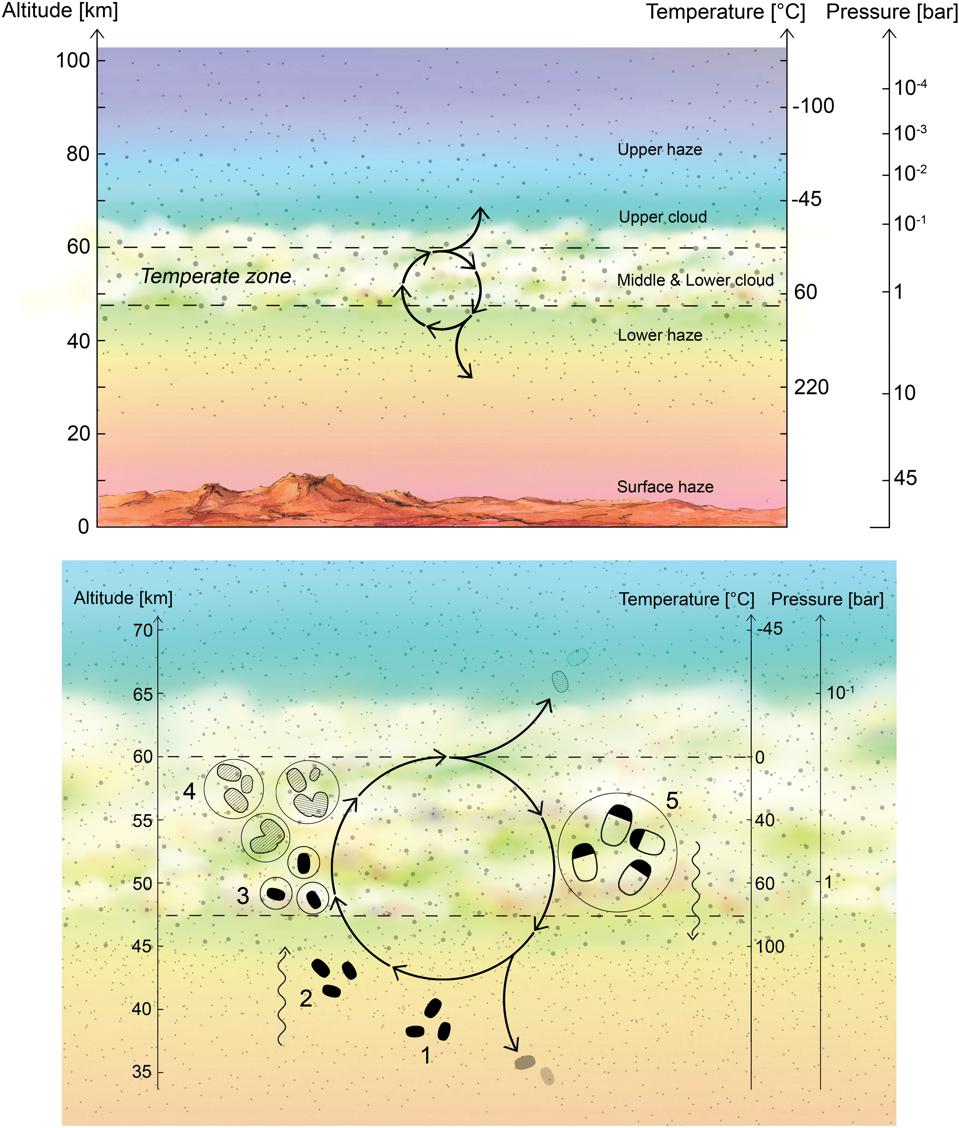 A hypothesized pathway, involving microorganisms, that could produce the necessary amount of ... [+] phosphine in the Venusian atmosphere. This involves a healthy dose of speculation, and should be treated accordingly.

But what is its cause on Venus? Why does phosphine exist here?

Although it could be any of those, in principle, betting that biology is the answer is like buying a single lottery ticket and expecting to hit the jackpot. If life is producing this phosphine, it has to somehow survive reacting with the sulfuric acid, and would require phosphine-producing microorganisms to be extraordinarily abundant and efficient. They would need to occupy the full volume of Venus’s temperate zone hazes, and operate near peak efficiency to account for this signal. It’s not impossible, but it’s an absolutely preposterous scenario. 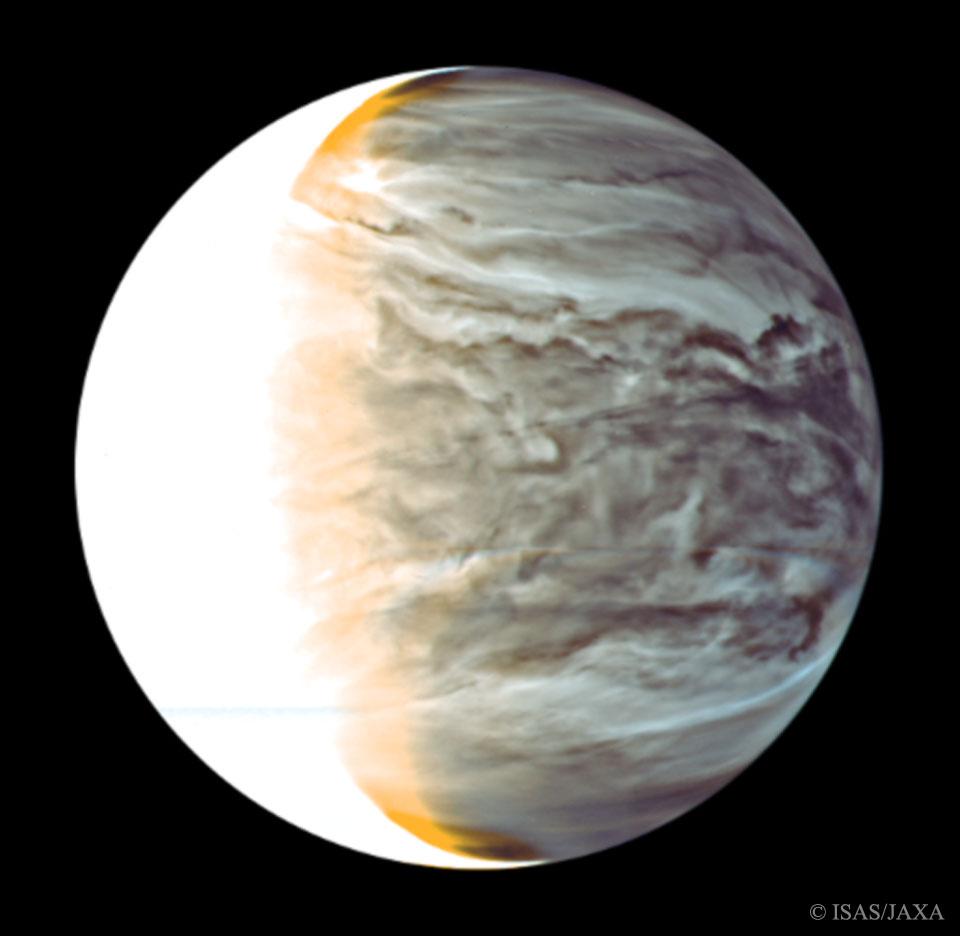 An infrared view of Venus' night side, by the Akatsuki spacecraft. Its brightness is greater than ... [+] that of any other planet as seen from Earth, and it approaches our world closer than any other planet does. When it is on the other side of the Sun, only a few other planets appear smaller.

So if it’s not life that’s causing the phosphine, what actually is responsible?

It can’t work the same way phosphine production happens on Jupiter or Saturn, as the intense pressures provided by a thick atmosphere of hydrogen enable its production there. But we haven’t ruled out every form of chemical reaction fathomable, not by a long shot. We’ve only ruled out the forms of chemistry that were explored: reactions and production pathways that the authors, involved scientists, and referees thought of. As the authors themselves noted:

“Even if confirmed, we emphasize that the detection of [phosphine] is not robust evidence for life, only for anomalous and unexplained chemistry.”

Remember: there’s still so much we don’t know in general, and about the details of Venus in particular. What are the densities of various gases throughout the Venusian atmosphere as a function of altitude and latitude? What is the phosphine distribution? What are the precursor (or post-destruction/dissociation) molecules involved? And how does the presence of various sulfur compounds, which exist in extraordinary abundance in Venus’s atmosphere, change the equations for the reactions we’re anticipating? 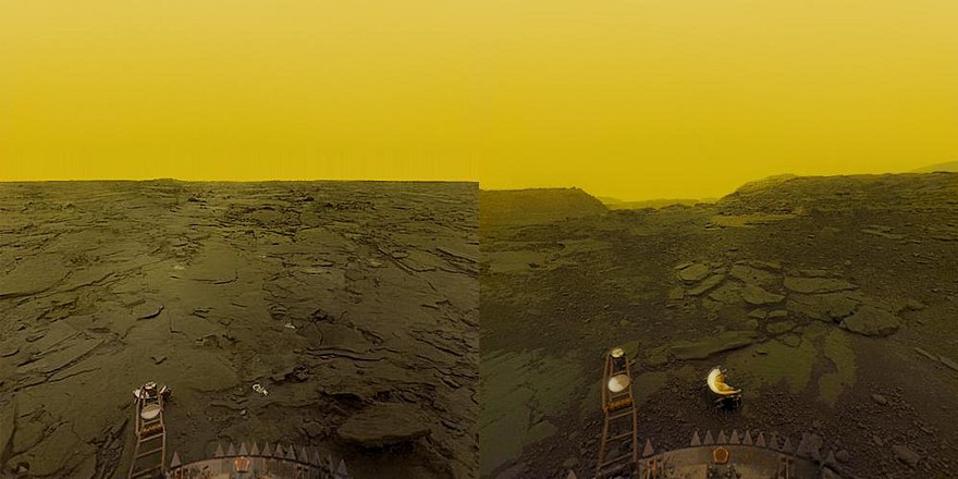 As imaged by the Soviet Union's Venera landers, the surface of Venus is violently inhospitable. Some ... [+] ~60 kilometers up, however, Earth-like conditions in terms of temperature and pressure exist all over the planet. It could be geological, chemical, or biological processes that are producing the observed phosphine.

This is one of the most exciting moments that occurs in a scientist’s life: we’ve discovered something unknown, and the conventional explanations we can think of cannot explain it. There is a relatively abundant molecule present in the atmosphere of Venus — phosphine (PH3) — and we don’t know where it comes from. To understand it, we’ll not only need newer, superior observations, but likely additional missions to explore and probe our nearest neighbor planet as never before. When it comes to the question of life on Venus, it’s the only way to find out.

But claiming that alien life is even a likely resolution to this conundrum is a wildly speculative idea at best, and simply wishful, unscientific thinking at worst. Our ability to ask big questions about life in the Universe is well ahead of the data we have access to at present, and while there’s nothing wrong with letting our imaginations run wild, it’s important not to place the majority of our resources in betting on the cosmic long-shots. We have a fascinating new mystery to solve right here in our own cosmic backyard. For anyone curious about the Universe as it actually is, that should be more than enough.

Read The Rest at
forbes.com

6 Bathroom Renovations You Can Tackle Without a...

Devan Lauded by Frost & Sullivan for its...

Playspaces with tape around them. A sad sign during COVID19.
6